In Which I Become A THREE TIME IRONMAN…………….. event spectator

With Ironman Lanzarote not being enough of a challenge in May, Father In Law Tony had also entered Ironman UK. Two in three months.

Everyone went over to Bolton to check into the Premier Inn sometime on the Saturday afternoon. I was working until six, so made my own way there via Manchester and McDonalds. I thought everyone would’ve eaten by the time I got there, but they’d been waiting an hour for a table in the restaurant so Sarah text me pictures of the menu and I then text Sarah my food order. (Technology is MARVELOUS!)

Everyone was fed, I had a few beers, then it was off for an earlyish (not at all) night.

We got up early. And I mean EARLY. When we watched Iron man Lanzarote the event began at 0700. That meant we got up around 0600 – 06:15 and had a short walk down to the beach to watch the swim start. For what ever reason, Ironman UK starts at 0600. And we were staying nowhere near the swim start. Luckily, the events organisers put on coaches for the athletes and supporters. The coach left at 0515. Ugh. 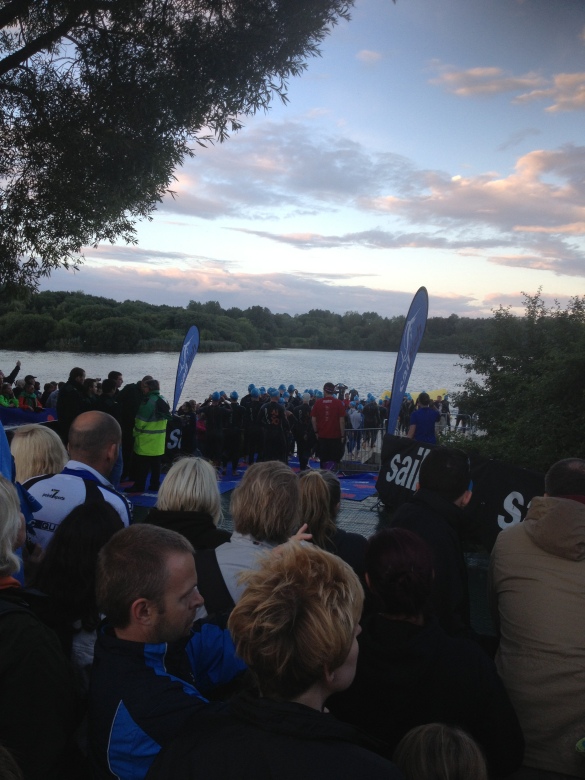 The Ironman UK swim course is in a lake thing called Pennington Flash. It’s a two x1.2mile lap course, and the athletes have to start in the water. Before the gun goes, they have to tread water for 5-10minutes or so which must use some much needed energy. After the first lap, they have a run of about 80m before doing the second lap. Pretty much every athlete that ran out of the water slipped on the mats. Not very safe. 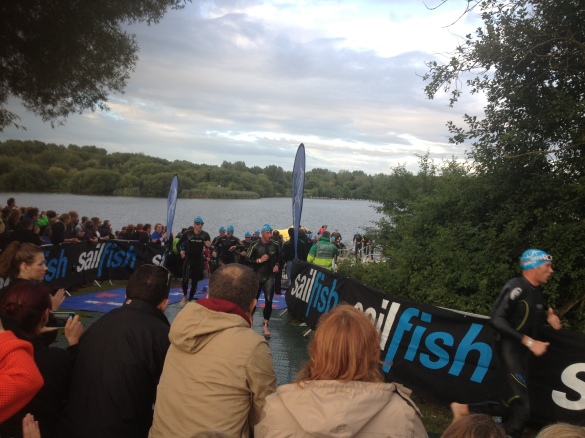 Tony came out of the water in just under 41minutes then got straight back in for his second lap. After we’d cheered him on, we moved up the course towards where the bike part would start. We got a good spectator spot and waited for him to run passed. We were also keeping an eye out for another family(ish) member. I think he’s my Wife’s cousins cousins husband. Or something… Anyway, while we were waiting for Tony, we heard “And coming out of the water, Martin Stoney!” and because that’s my wifes cousins cousins husbands name, we looked out for him. I think he’s done marathons and such, but this was his first Ironman event. A minute or so passed, and then he ran passed looking strong. 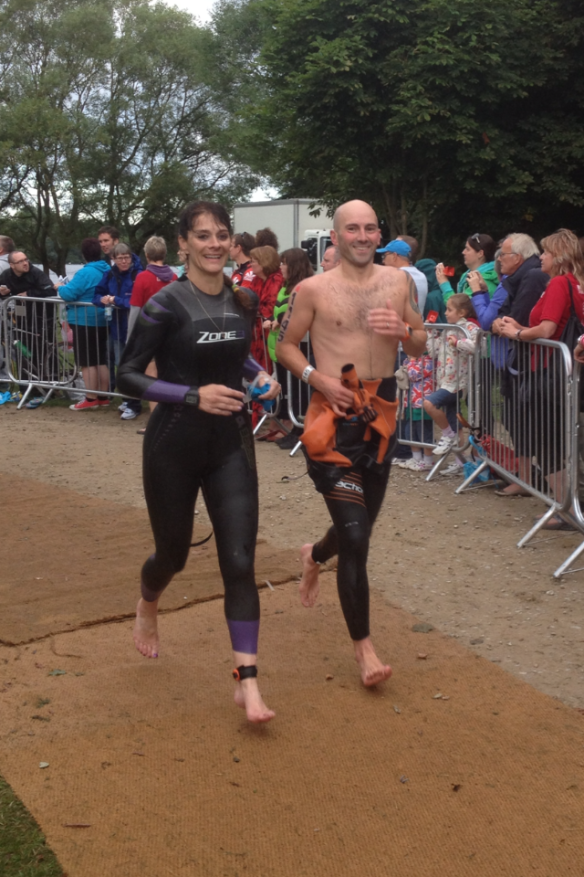 Not too long after, we saw Tony running up towards us and he stopped for a quick chat before running up to Transition 1 (where they get changed) and then he was off on his bike. 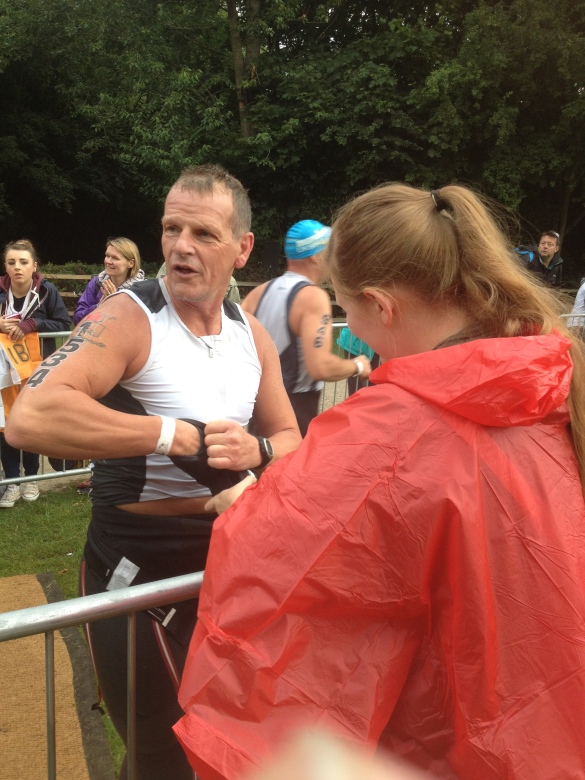 Sarah Helping Get The Wetsuit Off

It’d be AGES until we saw him again due to the course set up. We got on the free bus back to the hotel, and we all had breakfast. (Which was our Transition 1.) 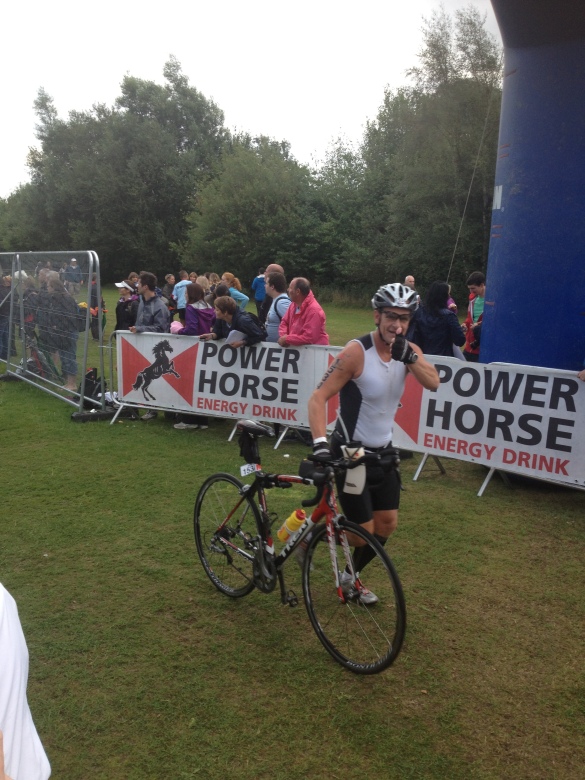 After about an hour we made our way to the train station and got on a train (obviously) to the centre of Bolton. Only took about 10minutes and so that wasn’t enough time for the conductor to come round and sell us a ticket. When we got off they had a couple of guards checking tickets so we went up the counter next to them where you could buy a ticket for the journey you’ve already done. I think if they’re too lazy to come round with tickets, it should be free. But it’s not.

When we were waiting a scruffy lad tried to run down to the platform but Guard 1 stopped him because he didn’t have a ticket.

The bike course for Ironman UK starts where the swim finishes, but ends about 6 mile away from the centre of Bolton. This meant that we could make sure we were in plenty of time to see Tony and Martin on their run. The bike course is a point to point 14 mile ride, before then going into a three lap route that starts at Adlington in Lancashire and takes in quite a few hills and villages. It then finishes at a high school where Transition 2 is waiting, after a total of 112 miles riden on the bike.

Our Transition 2 was the pub. 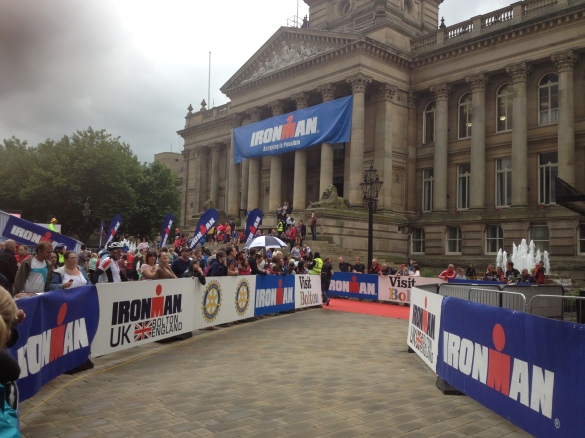 There were plenty of splits on the bike course so it made it easy for us to track Tony and Martins progress on the Irontrac App. (Lanzarote only had one split so had to be more vigilant.) Plenty of splits on the run course too, which makes it much easier as a spectator. Looking at the App, we saw that Tony had finished the bike section in 6:44 and Martin in 7:11. The Marathon for Ironman UK is a six mile run into central Bolton, followed by a three lap course for the other 20 miles. The first split the app tracks is at 10k, but then they’re every 1-3k or so. We thought that the first split was near where we were stood, but it wasn’t. We were expecting them to run passed us at anytime, but it turns out that we were closer to the 4th split, so didn’t see them for almost an hour later than we expected. And it poured down. 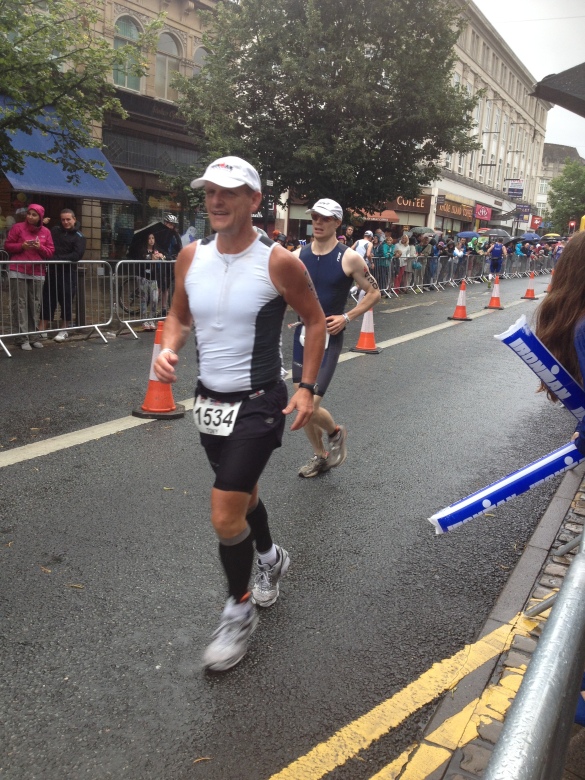 Before long though, we saw Tony running up towards us and he stopped for a few words. Then he was off again. With part of the run being 3 laps you see the person you’re cheering on six times. (With the last time being the finish.) We figured out which splits were which and made sure we were at the road side in time to cheer. (Inbetween was a combination of McDonalds and a pub. Or two.)

When they were on their final laps we made our way to the finishers chute and got a place in the stands. Again, using the Irontrac app, we had a good idea of when they’d be finishing. Martin came passed first to finish in a time of 14hours 17minutes. As we were waiting for Tony, the big screen broke and didn’t get fixed until after he’d crossed the line which was a shame as you could’ve got a brilliant picture of him finishing. Maybe next time.

Tony came down the chute and we all cheered. Susan had made her way to the front of the barriers and Tony stopped to give her a hug, before going over the finishers line in a time of 14hours 24minutes, (almost half an hour quicker than Lanzarote) and becoming a Triple Ironman. 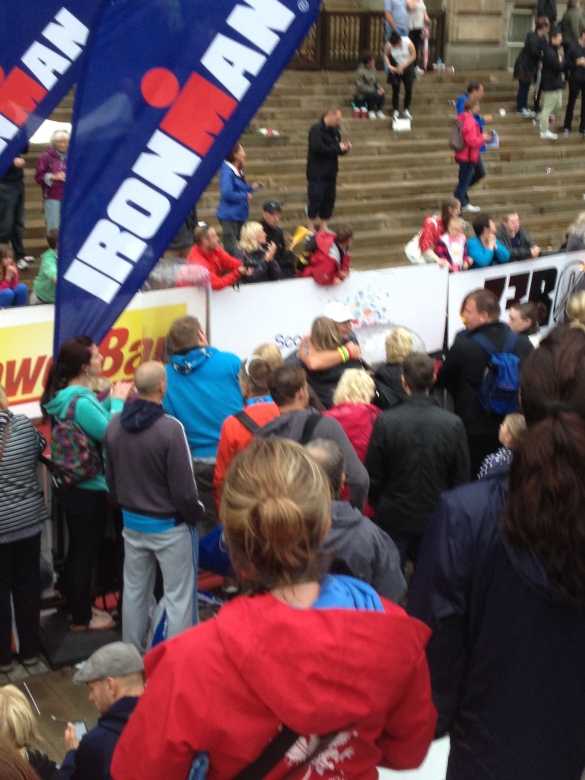 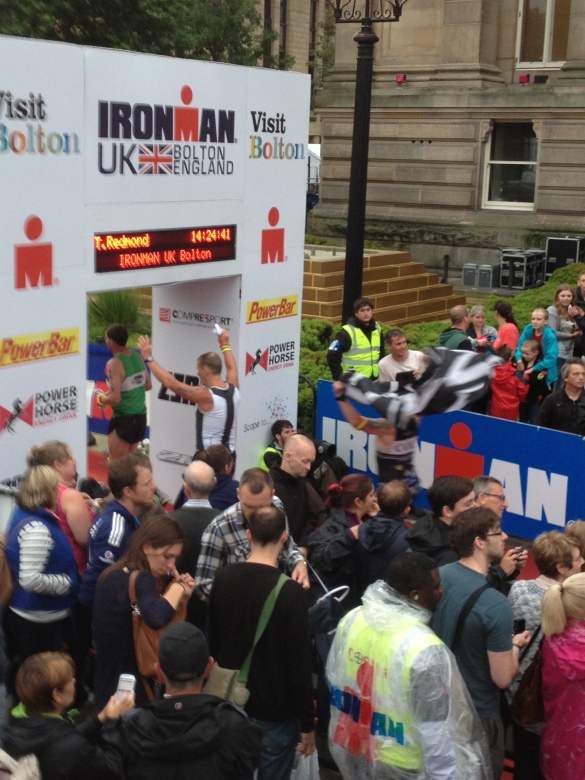 After breakfast we went and had a look at the Ironman Expo. It was a LOT better than Lanzarote, with loads on sale. I bought myself an Ironman training book as motivation. Hmmmm…… 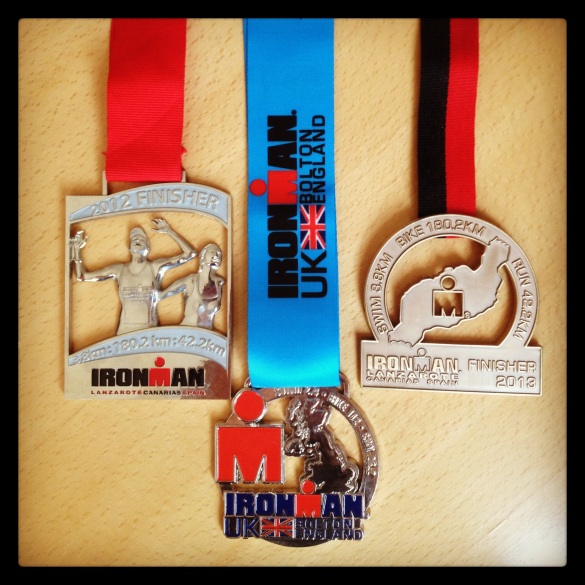 When we got home we went and got this: 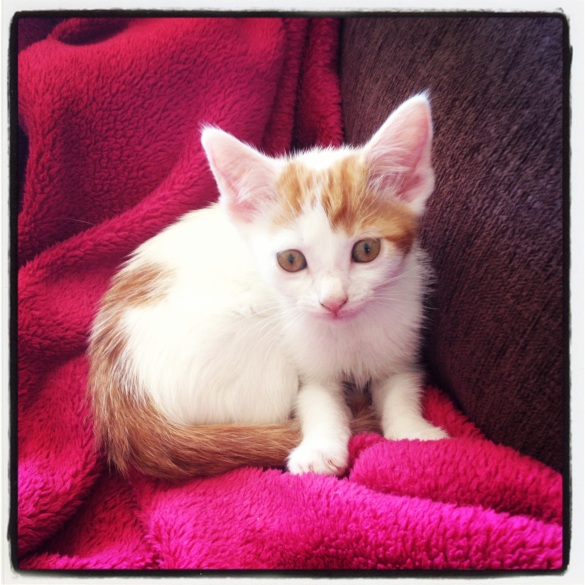 Our new kitten. Indy seems to be tolerating her so far, so that’s good.