In Which There’s So Much Bad Luck Going Round, If I Played Tetris My Next Shape Would Be A Circle

Our yearly trip to Lanzarote to support the Ironman Triathlon had come around for the fourth time. Along with Ironmen Tony and Rob, we were there to support Jim from the Gym who was making his Ironman debut.

(There’s not much of the Ironman event in this post, as the day is similar each year for spectators so I’ve blogged about it a few times already. Just so you don’t think I’ve missed out the most interesting bit!)

We flew out on a Tuesday with the airline Ryanair instead of Jet2 who we normally use as Ryanair were less than  half the price for the flights. Turns out they can offer cheaper flights because they give their crew zero personality or friendliness training.

Sarah asked for a menu card or magazine when they came by so we could have a look and we were told they didn’t have any with them. This was followed by one of the staff pretty much running up the aisle saying ‘Any hot food?’ and not giving anyone a chance to buy anything. I can honestly say I didn’t see any of the staff break a smile. 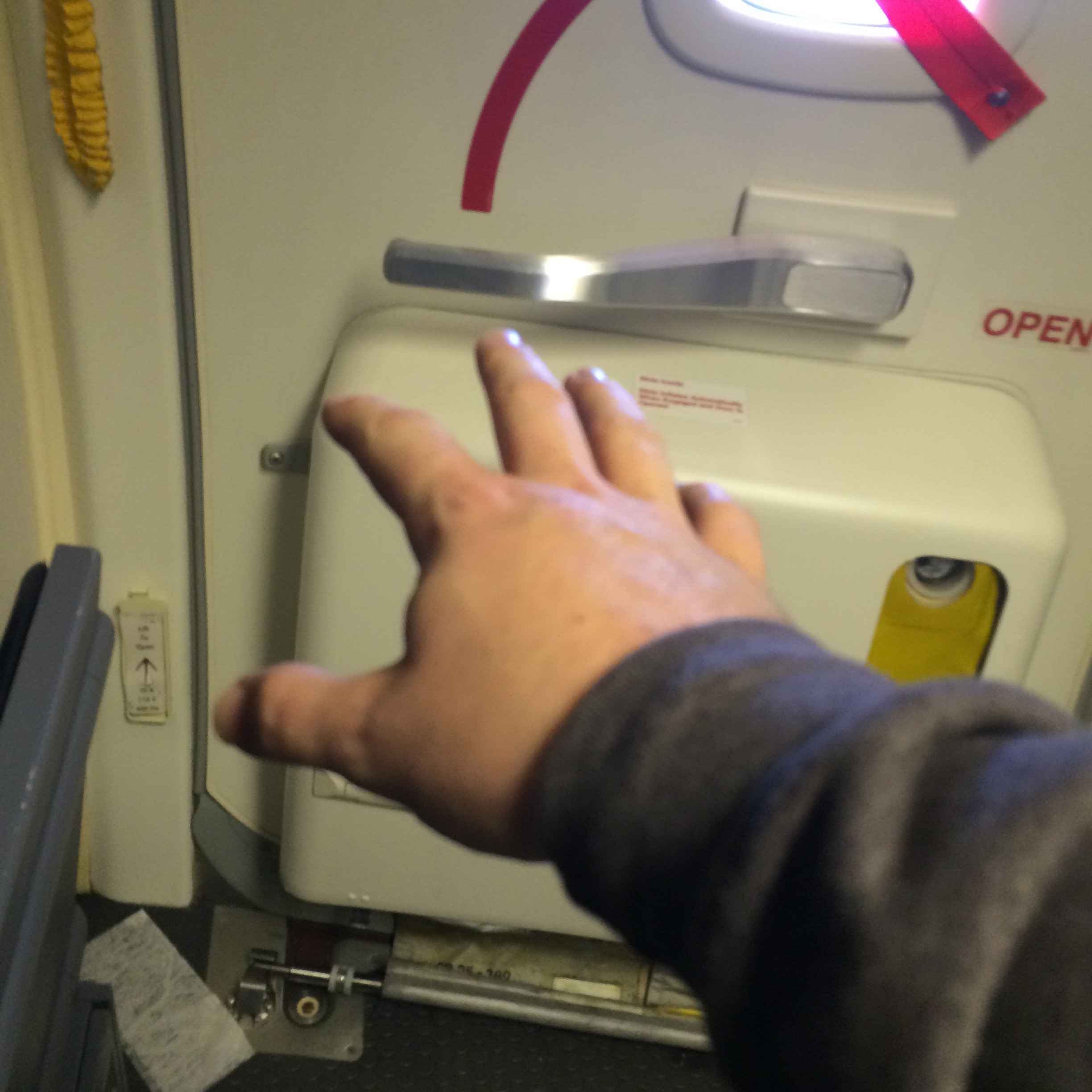 So tempted so save everyone from the moody crew

Ah well, we were off on holiday!

We arrived, and it was cloudy. Rob and Karen were on our flight so we shared a taxi into Puerto Del Carmen. We couldn’t get into the same place as everyone else so we booked a little down the road. Very nice apartments (Relaxia LanzaPlaya if you want to nosey on TripAdvisor.)

Mordor, just in the distance

A couple of pigeons were flapping about so we fed them some bread.

The next morning I woke up early to go for a run, but then fell back asleep. I woke up a bit later on to go for a run, and went for a run. It’s lovely and flat along the shore line and checked my watch thinking I was around 8:30-9:00 minutes a mile but it was saying 7:40..! I was aiming for 5km so turned back when it said 1.5 miles and tried keeping the same pace. God it hurt. It was hot and I’d almost done a full bottle of water. Got to 5km the fastest I’ve ever done it though!

Heat, hangover, and too much food is the way to a PB, it seems

After my run and shower there was a cat near our apartment so I made chh-chh sounds and it climbed up to our second floor apartment and I gave it some ham.

Later on myself and Sarah bought a padlock and added it to the ones fastened onto the chains on the seafront. 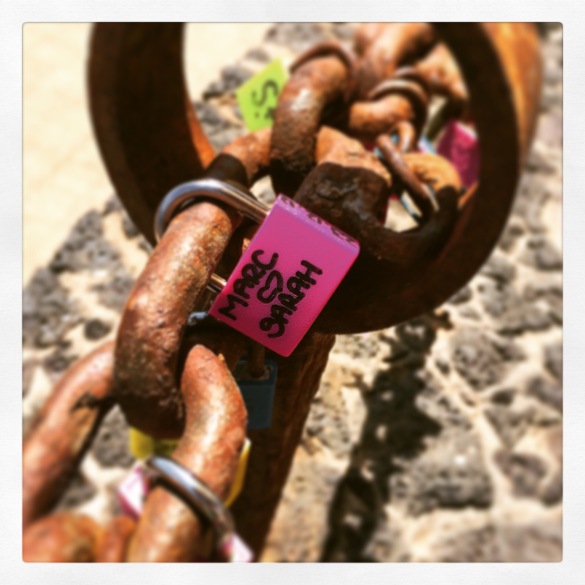 Relaxing on our balcony, drinking beer and reading a book, a couple of the pigeons turned up so I chucked breadcrumbs at them. One was hopping around under the chairs when the other squawked and flew off. I looked over and the cat was there. I jumped up to scare it away from the other pigeon but the little bastard dove forward and STRAIGHT UP MURDERED THE PIGEON ON OUR BALCONY!!! It then ran off with the bird in its mouth. Me and Sarah were horrified, but I’m chuffing glad it took it with it, no idea what I’d do with a dead pigeon on holiday…

The next day – Thursday – Tony, Rob and Jim went out for a bit of a practice ride before the big day on Saturday. On the ride Jim hit a pothole in the road and came off, puncturing both tyres and injuring himself so much (think he cracked a bone) that the physio he went to see told him he can’t exercise for six weeks, and won’t be able to do the Ironman Triathlon.

Always awkward when someones wearing the same as you

They were off, we were cheering, and we paddled in the sea til we figured it was about time to watch them coming out from their first lap of two 1.2mile loops. We seem to do quite well at spotting them to say that everyone looks the same! This year though, we only saw Tony and missed Rob. Half hour or so went by and we moved further up the beach towards Transition where we could get a better view of them finishing the swim.

Whilst we were looking out for Tony and Rob, Rob turned up behind us on the beach which was odd as he should be swimming. It turns out that around 3/4 of the way round the swim his leg had cramped down the full length of his muscle and so went to one of the speedboat guys and said he can’t carry on.

After Tony had set off on his bike and we’d had breakfast, I decided to go force swim in the pool. 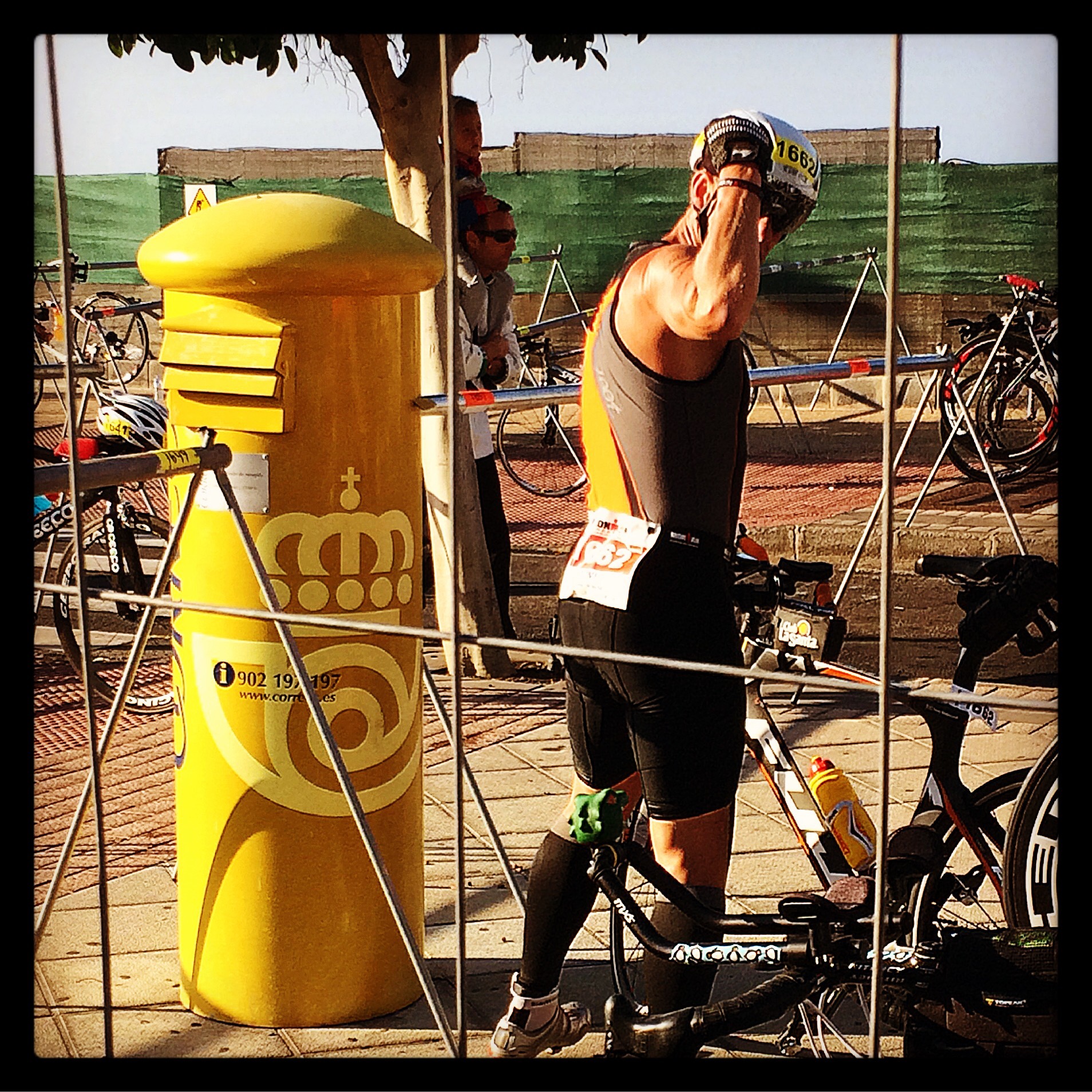 I did my furthest ever swim, which was the distance of the Ironman swim:

The bad luck here is that my whole back got sunburnt, and it was quite chuffing sore for the rest of the holiday!

After he came back of his bike ride and had set off for the Marathon section, we went into a place called Mojitos and had some lovely pizza. We ran across the road and back each time Tony ran by us.

Tony showboating for the crowd

We made our way to the finish line for when he was about an hour away from finishing and cheered on everyone that came by. Before too long Tony arrived and finished Lanzarote Ironman for the fourth time (5th IM in total) and got a new Lanzarote PB of 14:25:42.

The time went by, as it does, and soon we were checking out, back stat he airport, flying home and unpacked. I still had a few days booked off work so on the Friday I met up with my friend Jemma (who’s training for her first ever 10km in Leeds in July) and we went for a 10km run. (With hills.) Furthest she’s ever run on the road, and we got round in a very respectable 1hr 4mins.

The next day was put aside for a long training ride with Katie (from my last post) as we’re both entered into Ironman UK. I mapped out a 60ish mile route and arranged to meet in Dewsbury at 11am on the Saturday.

I rode the 15 miles to the meeting place and was a bit early. My phone rang, it said ‘Katie’ on the screen. I answered and a woman said ‘Hi, you don’t know me but your friend Katie has had an accident.’ I asked how she was and was told ‘I’m not sure, but there’s an ambulance here.’ I told her to pass on my good thoughts and hoped she was ok, then we both hung up. (As it turns out, Katie had been knocked off her bike, was unconscious for 20 minutes and as a result has a dislocated shoulder which has forced her out of Ironman UK. Truly gutted for her and feel guilty about it for organising the ride. I didn’t find this out til later though, so at the time decided to ride on solo.)

Three miles down the road I got a puncture. No problem, I have a spare inner tube. The inner tube I’d brought was for my mountain bike, so useless.

As I was taking the tyre off to get to the inner tube, one of the two levers that you use to pull the tyre from the rim pinged off, over the wheel, through a fence and into a bunch of nettles ten feet down.

Landed somewhere near that plastic bag

No way I was going down there! I eventually managed to find the puncture and repair it with my kit, then set off again.

Puncture repair thing blew off, back to flat. Checked my phone and the nearest place for a new tube was 3 miles in either direction. Checked for buses, none. Sod it, I walked. At least it wasn’t raining…

Got into Brighouse, bought two new inner tubes (to be safe) and changed the flat. The section of the ride which should’ve taken around 25 minutes had taken over two hours. I headed for home, deflated (but tyres inflated.)

Saw my neighbour in her garden, her husbands been ill for a while and she told me he’s died.

Decided to make some food, pulled a cupboard door off.

Dropped my food on the floor.

So there you have it, ten days of crappy luck for everyone. (Apart from Tony, maybe he’s jinxed us all to get his PB?) Little under 7 weeks til Ironman UK now and I’m proper nervous. If you’d like to sponsor me (any amount is a bonus!) then this week would be the time to do it, as I got this email:

Want To Be Friends?