In Which I Go On Holiday

Last Thursday myself and Sarah (and lots of family and friends) flew out to Lanzarote to watch Ironman Tony and Ironman Rob compete (once again) in Ironman Lanzarote.

Our flight was two hours delayed which we spent (expensively) in the bar, staring at the departures board but before long we boarded (no longer bored-ed) and bound for Lanzarote.

The best thing about the delay was it gave a chavvy family plenty of time to get VERY drunk and annoy every single passenger, which wasn’t in the slightest bit irritating and reading this back I realise I have no way to convey sarcasm in my writing. Might try using italics next time.

Plane landed, drunk family got arrested, we picked up our bags and also a taxi (taxi from outside the airport, didn’t take our own) then got checked in. Straight out for all you can eat Chinese food, then to bed.

I woke up quite early and straight away got up and dressed into my running gear before my head said “You chuffing wazzock, go back to sleep.”

Out the door of the apartment and my word was it hot! 8:30am and it was already 23 degree C! I walk down the hill to the main strip of Puerto Del Carmen and turned left to start my run. Would’ve been a better idea to have brought water though.

I set my GPS watch going and felt smug. There were LOADS of runners out and about and probably all of them had a bottle of water, so looked smugger-er than me.

Puerto Del Carmen is brilliant for runners and cyclists as there’s a cycle path which runs (pun!) the whole way along the beach side, and plenty of shops where you can stop for a bottle of water so long as you remember to bring some money out (which of course I didn’t.)

Checking my watch, I turned around after 2.5km and ran back the way I came. (Obviously.)

Before too long I looked and it said 5km (3.1mile) so stopped running but carried on sweating. Walked back to our apartment and drank about 8 litres of water, then straight in the shower. 5km time was 25:19. My second ever fastest!

Me and Sarah had frozen yoghurt.

Saturday – Ironman Day
Our Ironman Day was pretty much the same as last year, due to it being the same race and everything. Which is why I’m not doing as much of a recap as last year. Suppose I could copy and paste it, but I’m a bit lazy. Not even gonna link to it to be honest. Anyway!

We watched Tony and Rob complete the 2.4mile swim then set off on their bikes to ride 112miles.

Back at the apartment complex we had some food and mooched around for a bit and I decided to get in the pool and try some swimming. As you know (because you remember everything about me and my life) I only learnt to swim last year. It’s been about 10 months since I last swam though, and the furthest I’ve ever swum was about 8 lengths so just decided to swim til tired. I set the swim function on my watch and got going.

Sarah was sat at the poolside for a while so kept stopping for a little chat, then carried on swimming up and down, keeping an eye on the distance. I swam half a mile. HALF A MILE! Not the fastest in the world (33:25) but it’s a good base!

Me and Sarah had ice cream.

Sunday
After the business of the day before, it was organised as being a ‘lazy poolside day.’ I got up early again and went for another 5km run, same route as before but this time I took a bottle of water. For some reason, this slowed me down a bit (I know it wasn’t the water, it was due to the long swim!) but I still managed the 3.1mile in 27:11. Happy with that!

The afternoon was a BBQ in the pool bar, all you can eat, so made good use of THAT! 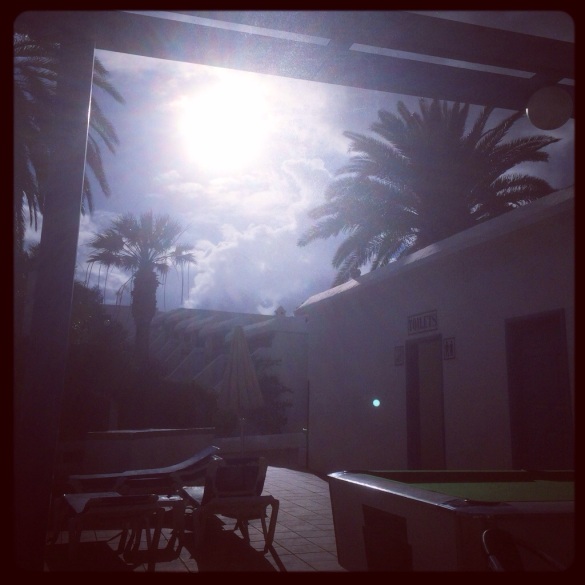 Monday
Decided to try a bike ride today, and had a wander down to rent a bike (which is the main ingredient needed for a bike ride I hear.) A mountain bike rented for 2 hours, plus helmet and bike lock, 5 Euros! Bargain! (When I asked for a helmet he looked at me and said ‘your head… Is a large.’ Yeah, thanks Pedro.)

I decided to aim for around ten miles so set my watch going and got the bike going. Zigged and Zagged through the runners and slower cyclists and made my way towards the airport along the cycle path. On one section it narrowed slightly, and there were a group of elderly people all along the cycle lane. No problem, my bike has a bell on it for situations such as this, but as my bike was at home and I was on a cheap 5 Euro rental bike there was no bell attached.

What do I say? Had to think quick, getting closer. Do I cough? Closer still. I could just slow down and say ‘excuse me?’ Whoops, hidden dip! I’ve sped up! Quick!

“BIKE!!” I yelled, causing the oldies to part like Moses parted that sea. (Thinking on it, one looked old enough to BE Moses. Poor bloke.)

Phew. Safely by. Followed the route by the airport and noticed a large hotel in the distance which I knew to be in Arrecife. Aim for that.

Got there and pulled over to the side to have some water. (Remembered my water!) Checked my watch and it said just over 8 miles. Felt good! Few minutes to catch my breath, then headed back the way I came. 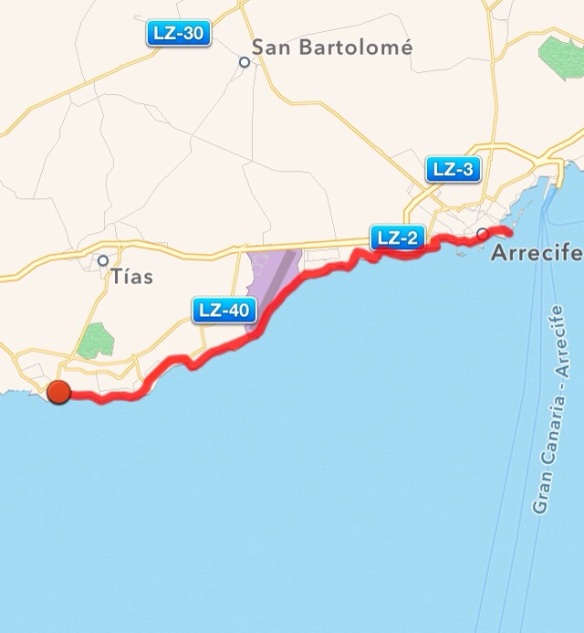 There’s a bit of the cycle path that’s been dug up at the moment so had to go inland a little bit but there were no cars so felt confident enough. That lasted until I realised I was going up a one way street the wrong way. Also, as well as going the wrong way, due to Lanzarote being part of Spain they drive on the opposite side of the road to us, so rode on the wrong side of the street for a bit too. Was very happy to see the cycle path!

Got my legs pumping and got back to the bike shop having riden just over 16miles in just under 1h 16mins, then handed over the bike. Gave the spaniard my large helmet too. (Snigger.)

Me and Sarah had frozen yoghurt.

Tuesday
Sore legs today so took it easy most of the day. Mentioned to Nigel I was thinking about trying another swim so he decided to swim too. I wasn’t expecting too much from this swim, having swum my furthest ever two days before, but pushed it and pushed it and, in a time of a little over an hour, swam A FULL CHUFFING MILE!

Me and Sarah had a strawberry/cream/yoghurt thingy. 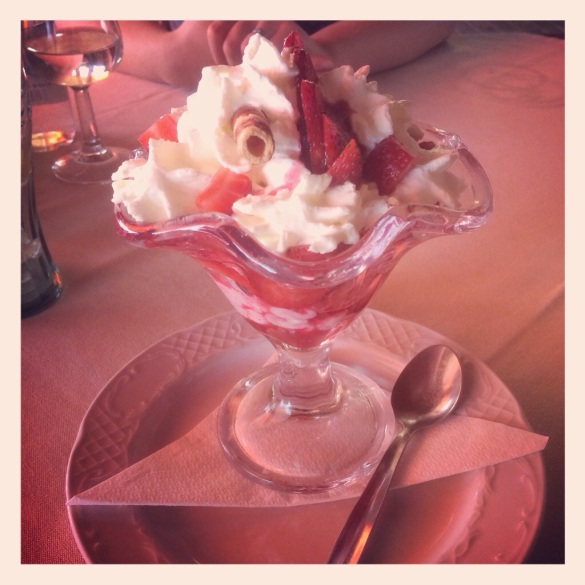 Wednesday
Told Ironman Tony I was off to rent a bike again and he said he’d come along. Did the same route as before, but went further this time and turned around in the centre of Arrecife at ten miles. Came back along a VERY windy cycle track and back to the shop having completed just over 20 miles in 1h 42m. Very very glad with all the holiday training!

Sarah had an ice cream. 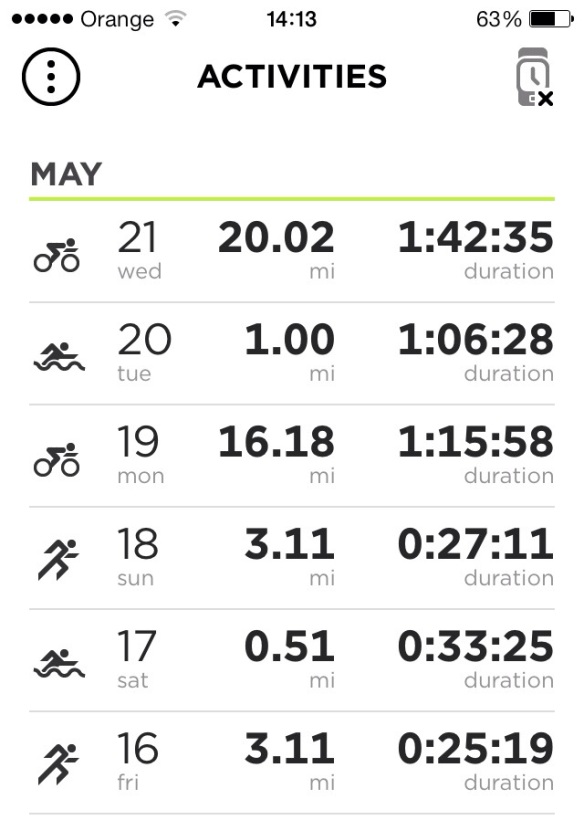 After talking with both Ironmen (and Ironman Mark who owns the pool bar) I’m very VERY set on doing Ironman Lanzarote next year. I’m not a fool though (no matter what ANYONE) says so am going to assess my fitness and training in August, to see how I’m getting on.

In Other News
Hope you’re all well!