In Which I’m Almost Blown Away!

Goals For The Race:

Sunday morning, tried to eat some porridge but couldn’t eat much because I don’t really like porridge, especially in the morning. Had about half. 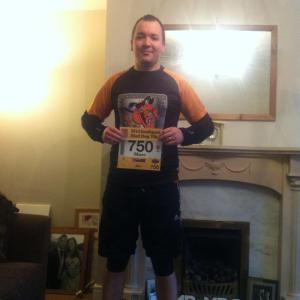 Still no idea how to pose for a decent picture. I’m 31 for goodness sake!

Got picked up by Ironman Tony and future Ironman Nigel, and we then collected Ironman Rob and set out for Southport on the coast, just under two hours away.

Hardly any traffic or roadworks or dead zebras so got there at the expected time. We all got out of the car and WHOOOOSSSHHHH!!!! Windy as a Windy day in Windy town on New Years Windy Eve! Also, it was freezing!

I’d packed a pair of long shorts for after the run, so I didn’t make the car smell of sweat too much, but decided to put the long shorts over the shorts I was already wearing because it was FREEZING. 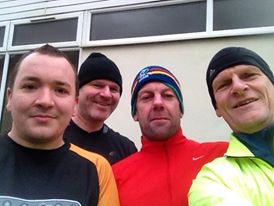 We boarded the free bus to the race, found our way to the start (after a toilet break) and before long we were off. Ironmen Tony & Rob were well away from the start, where as myself an Nigel ran together. No one set off too quick however, due to the (what turned out to be) 30mph winds coming straight at us.

The run route was flat the whole way, but the first 5k honestly felt like we were running uphill. Ran passed a drumming/samba band and then passed a mentalist who was singing (?) at the side of the road, dressed as Elvis. Think he was there last year too. (Hasn’t improved. Not a jot.)

Along the sea front we ran, and on one part it was so windy the sand was blowing against my face. Didn’t tickle. Chatting to Nigel about triathlon and Ironman plans made the time pass easy enough, and we reached the 5k marker bang on 30:00.

I was feeling good as we ran by the water station and asked Nigel how he was feeling. He was breathing heavy, and so, due to wanting to beat Nigel, I sped up a bit without saying anything to him. Did I feel bad? Nope. Not one bit.

As it turns out, I’ve never run a 10k race without having a little walk break (or two) along the route. I normally walk at the aid stations so was pleased with how I was going.

Never even had any formal Paint training! None! (C) Me

3k – 7k was a loop, before meeting up with the road we did the first 3k on, and as such was a bit further in land. That meant that there wasn’t a tail wind until just after 7k. I started to pick people off from 6k and felt strong.

7k hit, and the wind was welcome this time, pushing me on towards the next marker. 8k passed, and still feeling good I pushed a bit more and a bit more. 9k in the distance, no problem. I knew that I’d manage to get to the end without walking at all, and that made me push a bit more. More people overtaken, more speed.

I honestly don’t think that between 7k and the end, I was overtaken by anyone. Marc Hemingway: Boastful.

Rob was waiting right over the finish line, then we waited for Nigel to finish and went to find Tony. Goody bag and fruit collected, we went to get our race T-Shirts then back on the bus, back in the car and home.

Got home and Sarah had been out and bought me beer and a nice bit of junk food. She knows me so well! Also excellent goody bag again! 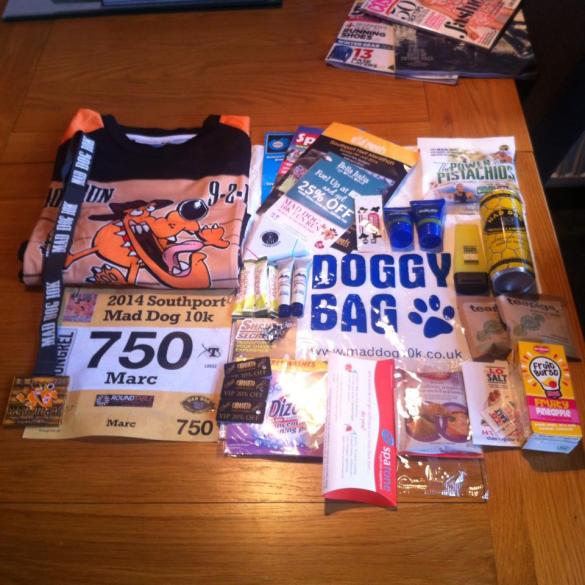 If the wind hadn’t’ve been so windy, I honestly think I’d’ve gotten a new PB. (The winner finished in 37:05, where as last year was 32:32, so must’ve been a slow first half for everyone) As it is, VERY please with my first non-stop 10k and VERY pleased with my millage times, most quicker than the last:

In Which I… Am Sorry, Truly Truly Sorry

Because I’m aiming to compete in triathlons, after most of my cycles home (cycle… homes?) I’ve been putting my bike away, then getting straight out for a short run. (Technically known as ‘Brick’, cycle then run afterwards.)

A few days ago I cycled the long way home (seven miles) and set off running on a small loop around home, which measures just under two miles. What with it being January and that, it’s dark at night. The first half of the loop is uphill, so nice and steady does it, but then the second half is downhill which means I sometimes get a bit giddy and speed up.

One small section of the downhill is where the pavement narrows, but there’s a line of a half dozen houses with bushes along the road.

Which is why, in the dark, if you live in one of those house you should look both ways when leaving your garden. NOT, as happened, amble (yes, Amble!) out your garden then meander (yes, Meander!) down the hill.

The reason being, there might be a giddy runner stonking (yes, …you get it) down the hill (maybe looking a bit upwards because he might think ‘if there’s bats around I might get bit and turn into batman’ and yes I know that’s not how batman became batman but I’m not rich like batman and yes I know it’s Bruce Wayne that’s rich technically but technically SHUT UP because I KNOCKED RIGHT INTO HER!)

Yup, right into the back of her. Obviously, she screamed very loudly (didn’t shout for batman though. Should’ve suggested it) I’d realised a split second before hitting into her, that in was about to (within a split second) hit into her, but had no chance of stopping.

I did my best though, and with my super-reactions I caught her so she didn’t go flying onto the floor or over a wall. The thing is, as my left arm went around her shoulder and stopped her projection, my right hand automatically tried to help, but her arms were in mid scream in the air, so what I’m saying is this…

I think I grabbed a boob.

(A lesser man might’ve said ‘I was left feeling a right tit’, but I’m above such things.)

Which leaves the moral of the story to be this:

Not everyone can be batman, but always shout for batman just in case a batman is near. (Or, look before you leap. Or something.)

Lily (our kitten) has had her op this week and has taken to napping in my rucksack. Sarah thinks it’s cute, I’m reserving judgement for when I see how much cat hair gets on my running stuff. 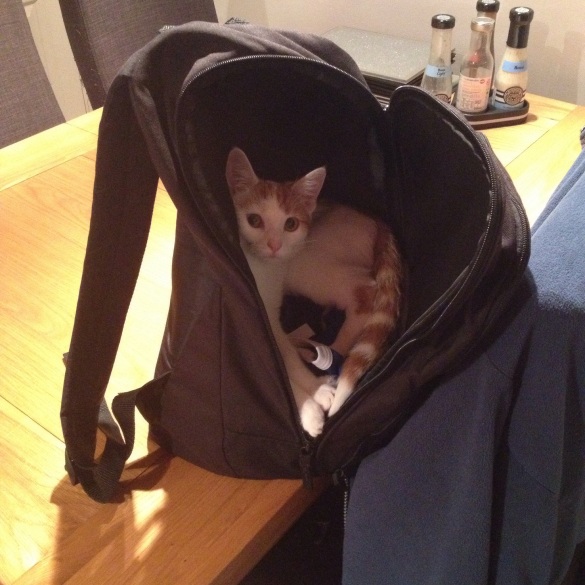 After less than five hours sleep, a 12hr shift and it being WAY to hot, I recorded my slowest 10k time in years. York 10k this Sunday so taking it easy! #fitness #running #weightloss #Scotland #edinburgh #slimmingworld #york #york10k #trainhardfinisheasy
Very good idea moving back near the beach, bit warm tho #edinburgh #Scotland #musselburgh #scenic #dadsofinstagram #fatherhood #beach #beautiful
York 10k a week tomorrow (on Yorkshire Day!) so obviously left it til now to start healthy eating. Rice and lots of veg! #healthy #fitness #weightloss #york #yorkshire #trainhardfinisheasy #running #runforall #foodie
We've moved out of Edinburgh city centre for somewhere bigger, definitely needed the space! My main concern was that there wouldn't be as many places for Finn to go play but 15 minutes walk away is Newhailes, and has a huge adventure play park. Only £1 for adults (but think you're expected to take and pay for a child?) #edinburgh #Scotland #newhailes #weehailes #adventure #musselburgh #playpark #dadsofinstagram #fatherhood #myworld
Rain doesn't slow us down, we go get on our wellies, jump around in puddles, and be all like Gene Kelly #dadsofinstagram #fatherhood #edinburgh #Scotland #rain #weather #scenic #beautiful
Me: I'll never force my child to take an interest in my interests. Also me: LOOK WHAT I'VE GOT US #dadsofinstagram #fatherhood #Scotland #edinburgh #gunsnroses #gnr #sweetchildomine