In Which You Are Impressed. Admit it.

Last Sunday was the day of Skipton Sprint Triathlon, 400m Swim, 20k Bike Ride and then a 5k Run.

Running the race were two of Sarah’s uncles, Nigel and John, and her Granddad Norman, who is 83 years old and decided that he fancied completing his first triathlon. At 83 years old. A triathlon. He’s 83.

I borrowed this from the Telegraph and Argus website:

“Spectators in Aireville Park were treated to an inspirational display of courage and determination as 400 athletes battled against blustery conditions to complete the Skipton 2 Late Summer Triathlon.

The event, held over the same course – 400 metres swim, 20 kilometres cycle and 5km run – as the popular Skipton Triathlon in April, attracted entrants of all ages.

The youngest was 15-year-old Zoe Kitching of Leeds, who completed the race in a time of 1hr 24min 24sec to win the female youth category.

The oldest was 83-year-old Norman Redmond, also of Leeds, who clocked 3:10.40 as he finished his first-ever triathlon after spending many years watching his sons compete in the sport.” 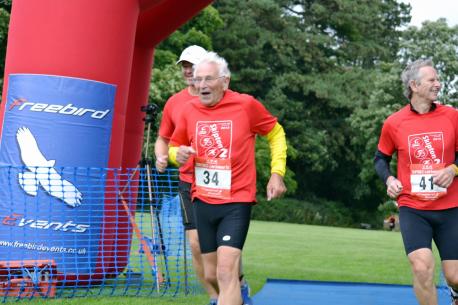 It was a very cold and windy day on the day of the triathlon and we were all VERY impressed with Norman (at 83!) and very chuffed for him when he finished. If he can do something like that at 83, there’s no reason the rest of us can’t do something similar at our age! (Unless you’re like, 84 or something…)
Update for Marathon Training
Last week myself and Rob arranged to go on a bike ride from Bradford to Skipton and back, 19miles each way. We went the wrong way at Keighley and so ended up cycling back on ourselves for a few miles, then found the canal so followed that towards Skipton. Instead of 19miles, we rode 26miles to Skipton, where we stopped for some food and then due to Rob working nights, caught the train back towards Bradford. I then cycled home another 4 miles for a total of 30miles. (Missing the target by 8.) Going to try it again this week but with a better idea of direction. (Also, we almost missed Skipton completely but luckily when we pulled into the side of the road, another cyclist stopped to see if we had a puncture or anything and directed us the right way.)
On Thursday I arranged to meet my friend Clare early in the morning (Half 8! Ugh!) for a practice run as she’s just started doing the Bradford Park Run and wants to get her time below 40mins. (Her best time for the 5k was 42:06.) I ran a couple of miles before meeting up with her and then we ran along the canal and through a bit of woods, then finished up in Idle.
The 5k route took us just over 40mins, so looking good for her next Park Run. I had therest of the day off, and after calling in at the Supermarket and walking home it wasn’t even 10:30. I was amazed, I’d done my run for the day, gone shopping and now had a full day off to feel smug about exercising early. That might be the way forward, instead of getting up on a day off and watching TV til lunch, THEN going for a run, I’ll get up early and run before lunch! (We’ll see how well that goes…)

30 thoughts on “Sarah’s Granddad Completes His First Ever Triathlon… At 83!”