In Which I Tell You That It’s A Fixed Distance, 26.2 Miles

You could stop reading now, I guess. I’ve answered the question. Or you could read the explanation? S’up to you really.

Earlier this week, this came up on my Facebook newsfeed:

I was impressed! I’ve been a wrestling fan all my life and always liked The Undertaker. He’s not been on tv since Wrestlemania 30 back in April, so obviously is keeping fit by running.

Wanted to find out how fast he did it so read a few more websites, and it turns out The Undertaker and his wife (former WWE Diva Michelle McCool) ran the marathon for charity: 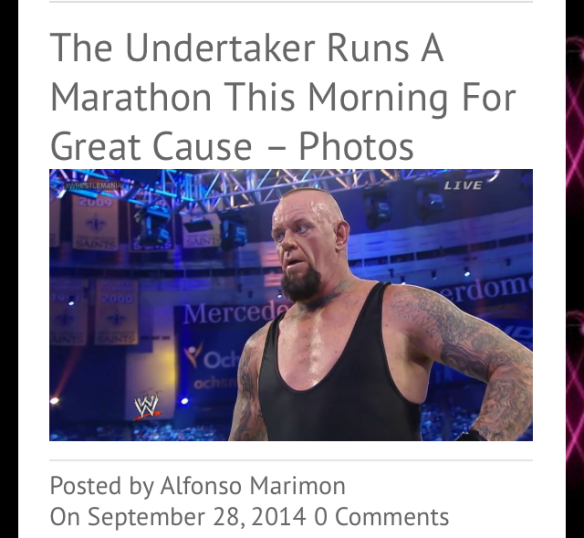 Confirms it! He ran a chuffing marathon!

Another site, however, said this:

“The Undertaker and his wife, former WWE Diva Michelle McCool took part in the CC4C Micro Marathon 4 Inspiration over the weekend. The event is a 2.62 mile family fun run.”

MICRO marathon? 2.62miles?? The other sites didn’t mention that bit! I’m in no way taking anything away from a (almost) 7 foot, (almost) 300 pound (almost) 50 year old wrestler running any distance for charity, but why is it reported as a marathon?

A marathon is a fixed distance. It’s set as a specific measurement. 26.2 miles, or 42km. That’s it. The third site had it right, calling it a micro marathon, but you can’t really have the headline missing out the ‘micro’ bit. 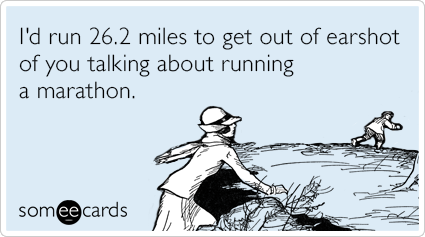 I’m sure before I started running I knew how far a marathon was. I thought it was a common knowledge kinda thing, but I’m not sure that it is. I have a few people at work asking me what my next race is, so I say “York Marathon” and they say either “how far’s that?” Or my favourite “is that a 10k?”

No!! It’s a chuffing MARATHON!

I was talking to someone once who told me they’ve run LOADS of marathons, with a PB of 32 minutes. (Yep, ‘marathon’ = 5km.)

So here you go, a quick guide to the most common races:

Each is as important as the last to each separate runner. They should all be respected equally as races, but call them by their right names!

And now you know.

(If you’re The Undertaker, and stumbled upon this by mistake when looking to read about your run, please don’t get mad and decide to come Tombstone me. Thanks.)