In which I’m not where I hoped to be

Ah. As you can see, I’m on Day 4 and already close to 17 miles behind schedule. In my defense, however, I’ve been quite ill. Ill enough to be sent home from work early on the 2nd Jan. Slightly annoyed that the illness chose the start of my 2013 in 2013 challenge to show it’s sickly head, but what can you do about it? Nothing. Apart from keep coughing up mucus (lovely), sweating into the sheets all night (sorry wifey) and over-dosing on throat sweets.

But then on one of my posts, I got this comment:

I always run (or ride) through colds and flus unless it’s the second day (where even my hair hurts). I believe that getting my body temp and heart rate up really shortens duration and severity. I could be wrong but I’ve been doing it for years and am happy with the results. – bgddyjim

‘I might fall down ill and die though,’ I said, ‘and won’t be able to get in touch with you!’

That’s true? What a lovely thing to say to your new husband! In all honesty, it didn’t cross my mind at the time, only now when I’m recalling the conversation. I’ll tell her off when I get in. Might set the kitten on her toes. (He loves attacking toes!)

Anyway, off I set. Since moving I’ve not run once, and don’t know the area fantastically well, so decided to do a short loop that I figured would be about a mile, maybe a mile and a half. (Turned out to be 1.4!) I did a quick walk to the main road as a warm up, then I set off at a slow pace. The route goes slightly uphill, then curves to the left and goes down hill, then a short, sharp uphill to finish.

As I set off I felt fine. No trouble breathing, no aches or anything, so upped the pace a bit. I passed a Policeman who nodded and said ‘Good lad’ as I went by. This made me smile and going into the downhill, I went a little quicker still.

It seemed to clear my man-flu for a while too, until I went to bed and it all started again. I felt ill still this morning, but not as bad as previous days, and so to keep my millage up I decided to walk to work. I actually got out of bed at 07:30am (unheard of for me, normally 08:30am!) Even had time for a coffee and a sit down stroking the cat before I set off.

3.8mile walk took just over an hour. Tonight after work, I’ll be running the same distance home, but it’s mostly uphill on the way back so I’m sure I’ll get a good work out from it!

On another note, I’ve started with healthy eating too. Instead of a dozen coffees through the day, I’m allowing myself one in the morning before work, and one before lunch at work. Green Tea (Apple and Pear flavour) is my tipple of choice now. Had an apple this morning for breakfast (instead of no breakfast, or McDonalds) and have made a healthy salad for my lunch.

I got home from work and decided it’d probably be a good idea to have a glance through the race info that ‘d gotten through the post about 2 weeks back and only looked at once. (I’d looked at my race number about 14 times.) Sitting at the dining room table I opened a nice cool refreshing can of non-alcoholic beer (mmmm…..) and started to read.

The info booklet was about the route of the 10k (it said 10k) and what time the 10k (said 10k again) started. While I was reading, Ironman Tony came into the dining room and picked up my race number. He then put it down, went over to the other side of the room and then brought out HIS race number for the Bradford 10k (there it is again, 10k) from where he’d been hiding it. Didn’t tell any of us, just sneakily entered. That brought our little group for the 10k (10k) up to five. 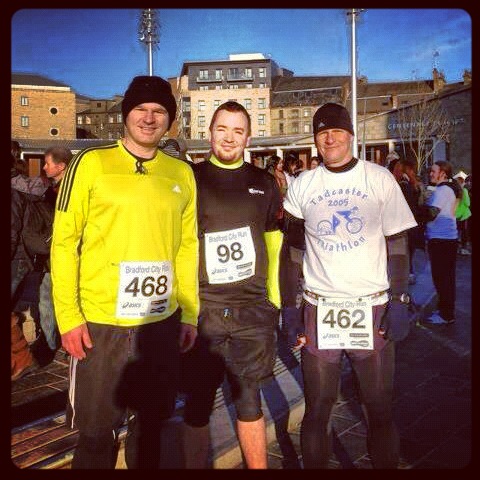 The race was due to start at 10:00 but before hand we needed to go collect our timing chips. We got there about 09:30 and there were quite a lot of people in running gear warming up, whereas I was freezing my arse off. The weather app on my phone said zero degrees centigrade. Six months ago I didn’t run, now I get up early on a Sunday to go into the centre of Bradford and freeze to death… 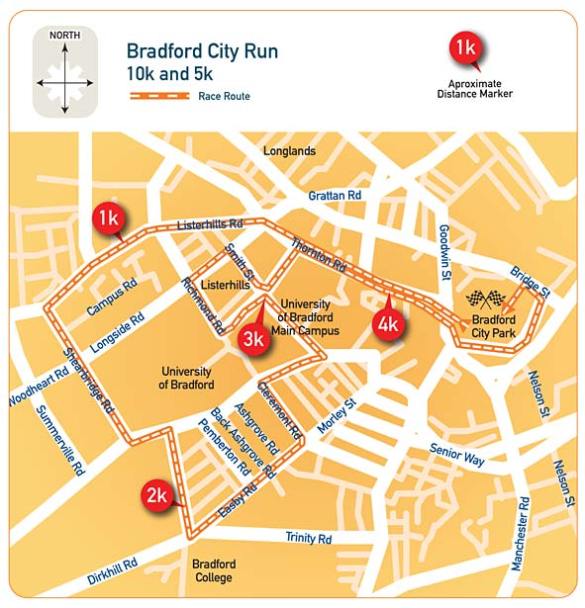 Anyway, we met up with Rob (rest of us came down together) and then after a few minutes lost Rob. After a quick toilet break it was time to line up at the start and luckily re-found Rob. (Not the hardest person to spot in a crowd.) The chimes on the town hall clock let us know we were underway. (Not with a loud speaker or anything, just by chiming ten times. For ten o clock. And a 10k.)

Straight away, as with the other race I ran with him, Ironman Tony was off into the distance. Before too long Nige and Paul were gone too, leaving myself and Rob stuck behind a massive cock as we went on Thornton Rd, on the first of our 2 5K laps. (Making….10k) 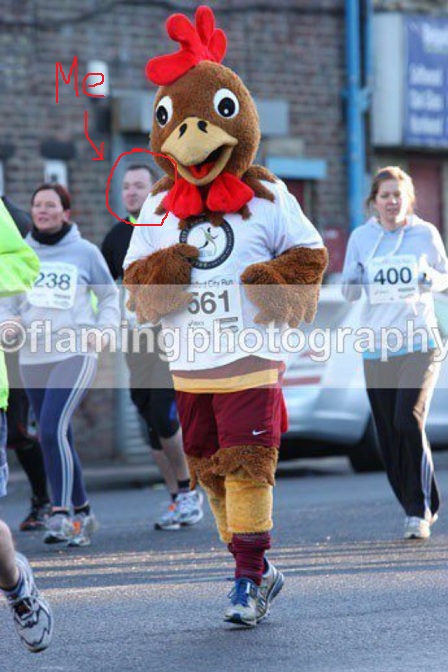 The course then took us up a lovely hill that never seemed to end and at the top we had a few seconds of walking as my calves weren’t warmed up enough and Rob was having trouble with one of his ankles. Setting off again we turned left and downhill, then slightly uphill. Left at the roundabout where we almost ran into a bloke shouting at a steward about the course route. We then followed the hill downwards with Bradford University and a water station on our left before turning left again and winding through a few of the Universities streets.

There was a hidden hill that we weren’t aware of. (Not like under a bedsheet or anything, just wasn’t expecting it.) And although it was short, it was very steep. Didn’t see that many people run all the way up without stopping. Back down again, then on Thornton Rd in the opposite direction. We’d had quite a few walks on the way, so was surprised when Rob announced we were on for a 25minute 5k.

We saw Ironman Tony coming the other way on the start of his 2nd lap and thought we were near the check point, but the course went a lot further round than we expected, round the back of City Hall and then around the front. As we went past the halfway point the timer was 29:28. Sarah was there to take pictures of us as we went past. Spurred on we were, so we went to do the same lap again.

Not much different on this loop apart from we took water from the water station, Rob stopped to stretch out his ankle, and I WAS SLAPPED BY A GIRL!

On the hidden hill we’d just got to the top when SLAP! Right across my left shoulder. I looked around and she said ‘Come on, get going!’ As though wanting to motivate someone is a good excuse for battering them in the back streets of Bradford. Rob just laughed.

We finished the 10k (pah!) strong and met up with Sarah, Ironman Tony, Sarah’s mum and sister and the others at the finish line. I was amazed, AMAZED that my sports tracker app recorded a time of 58:16!! That’s over a minute and a half off my PB, and 8 minutes off of Rob’s! That’s fantastic progress in only 2 weeks! That’s…. that’s…. hang on…. 8.8k…?

Bradford 10k (8.8k) had ‘steward problems.’ Which meant that the steward that was supposed to say ‘turn right here’ actually didn’t say anything, and let people run straight on. When the bloke was shouting at the steward early on about the course route, he was right! They missed off a whole chunk of it! We received a medal at the end, but the medal is for a 10k and we only ran 8.8k. The medal was a bit pants too, generic picture of runners on the front and a small stamp on the back that said ‘Bradford City Run 10k.’ Didn’t bother taking a picture.

Rob sprinted faster than me at the end, which means that 2 weeks ago out of the four of us I came 1st, but this week out of the 5 of us I came last. Or as Nigel kindly put it, ‘From Champ to Chump in 2 weeks.’

After the race, we all piled into Lloyds Bar for a breakfast and beer. (Plenty of beer.) Which made everything seem a little (a lot) better.

I got a message through Twitter asking if I wanted to talk about the Bradford 10k only being 8.8k live on BBC Radio Leeds. I got the message a little after the radio program finished. Stupid Bradford 8.8k.

Next race is the Meltham 10k in Huddersfield on 27th January. Hopefully it’ll be well marshaled!