In Which I Try Run 1… Just Read The Title Again

The best month I ever had was last year when I managed 100 mile one month. That month being last June…

I got so giddy I made this to keep a visual motivational paper pen notebook drawing representation of my miles:

Obviously one box equals one mile. Don’t need a comment like housemate Rob when he said “there aren’t 100 days in June”….

I worked a 12 hour shift, 6-6. So obviously you’re thinking that I didn’t run much, and honestly I was only planning on 10k at most, but ended up (no idea how) running 10 MILES.

Figured a short, 3.1 mile recovery run. Chuffing hurt that did though.

A guy at work, Paul, has started running. He’s only fine treadmill runs up till now though, so I convinced him to come out on the road with me. His fastest treadmill 5km was 38 mins. We did a 5km on the road in 30:45. OooooAHHHHH!

My day off so planned on running 15 miles. Slept in though, and stupid hot (for England) so put off my run for a day. Instead, I sat in the back garden and got sunburnt.

Woke up around half 7. Didn’t fancy running and considered putting it off again but I’ve been reading Unbroken (about Louis Zamperini) and the things he went through with running and everything else made me realise I was being a bit sawft, so got my kit on and got out the door.

0830 and it was already 16 degrees. My plan was to run uphill for 5 miles to a reservoir called Ogden Water, lap it a few times (four) for another 5 miles then run 5 miles home to get a total of 15.

Honestly, I considered turning around at two miles. My breathing was off, both my shins hurt and I was dripping with sweat. In my head I told myself I’ll get to 5k, then I can turn and end up on 10k. Got there, and figured I’d try push on to 4 miles. Got there, then thought if I get to Ogden Water I’ll do a lap to see what its like and then go home.

God it hurt. Hardest 5 miles I’ve ever done. Got there though. The laps of the reservoir are around 1.2 miles so figured I’d struggle through one then bugger off home.

Water selfie, then got going. And you know what? The lap was amazing. Breathing sorted itself out, plenty of shaded areas, beautiful scenery and hardly anyone there. I flew round it. Decided I’d do the full four laps after all. I seriously enjoyed each and everyone. The best bit was when I ran by a mother and son (around 5 year old) and I heard the kid say “Mummy, does that man know he’s allowed to walk?”

But then, THEN, that voice came into my head…

“Two more laps would get you home with 20 miles…”

And I still enjoyed it. Finished those, then ran the 5 miles downhill home. God it was chuffing hot…

Dunno what happened with my camera but this is me after 20 miles, looking quite fresh!

“Mad Dogs and Englishmen go out in the midday sun, not to mention Englishmen in Mad Dogs running shirts”

In case you don’t believe me, here: (look at that elevation!!) 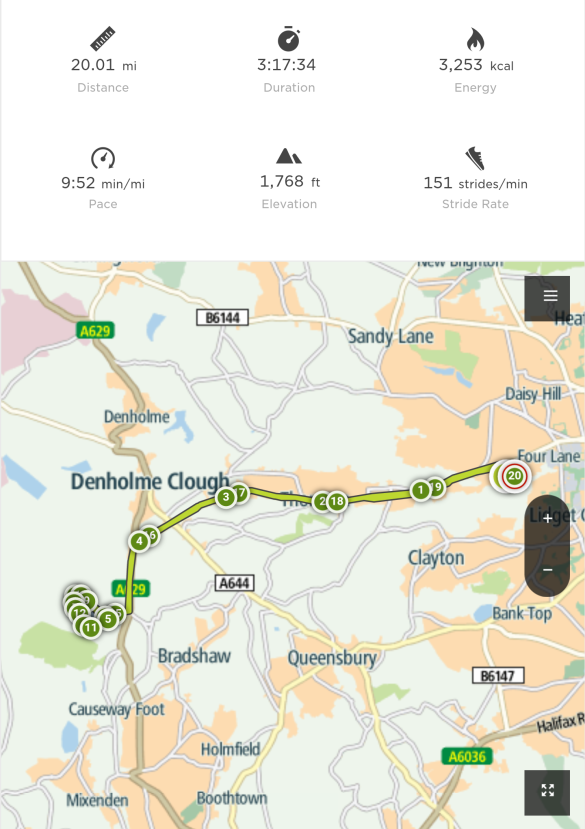 So yeah! 36 miles so far for June, very chuffed with that!

Still having trouble with Sports Tracker, this time it stopped tracking altogether when I was half way round my circuit which put me off completely. Deleted it and re-installed so hopefully that’ll sort it out. All my info has come back on, so looking good! Shame it’s a rest day.

Entered my second ever 10k run next weekend in Warrington (Birchwood) so aiming to get out on the road every other day this week, and have a couple of days off before the run. Seemed to work quite well for the Great North 10k the other week! Thinking of 4 miles tomorrow, 4 or 5 Tuesday, 3 Thursday then the 10k on Sunday. Plus now I have snazzy new running gear so I’ll look the part. (Or a prat.)

Apart from that quite a steady week this week. Been out three times since (and including) Sunday and feeling good. When I started this running nonsense my legs would kill the next day (sometimes next two days!) and that was after running a mile or so. Now I’m out for 3 miles and no pain the next day. Yesterday was quite a tough 3 miles though, because of the weather. Not used to seeing the sun up there, and it was VERY hot when I was going round. Plus I didn’t take anything to drink. (Idiot.) Must’ve looked a proper sweaty mess!

About halfway with my sponsorship now, and still to beg most of family and friends which means that I’ll get to my target and maybe a bit more. Feel free to join in!