In Which I Go For A Ride, And Someone’s Had Their Last Ride (As In, Dead.)

Last Monday it was a rest day from running so I went out for a bike ride instead. I planned my route out and figured it’d take about an hour, in the late afternoon. I mapped the route so that I’d go along and down the main road for a bit, before venturing off on the canal path for a few miles before attempting (and failing to conquer) a MASSIVE hill near home, before having a steady mile of flat roads and then home.

I planned it like this, a big circle around where I live, so that I could cut it short at anytime if I got right tired, or crashed or got bit by a walrus or anything. Be prepared and all that.

A little while after setting off I was on the canal path, and thinking to myself how nice it was that I’m seeing all this nature and getting exercise, which I wouldn’t even of considered a few months ago. I saw a Heron/Stork/Bird thing, which flew off before I got a picture. (I’m not bad at naming birds; Crow, Magpie, Penguin and such, and can also name Dog breeds: German Shepherd, Labrador, Pug, but when it’s Cats it’s pretty much just: Cat, Cat, Cat…)

Anyway, there were a few birds flapping about and probably a few fish swimming about, when I saw this in the canal: 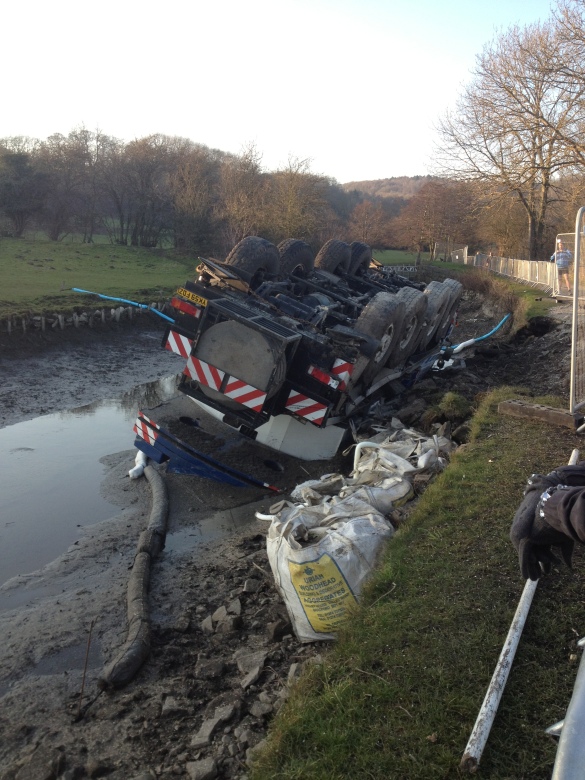 I’m not an expert, but I don’t think that’s how you drive one of these…

After taking a picture and getting back on my bike, I followed the path around the route, passing plenty of joggers and cyclists coming the other way which made me worry that I was on a One Way canal path and I was going the wrong way, with all the proper-way people tutting as I passed. Soon enough I passed another bloke on a bike though, heading in the same direction, so I used him as a pacer for a bit (mainly so I could blame him when the canal police told us off.)

I came to where I come off the canal path and took this picture of the evening:

Not even instagrammed! (well, OK, it is. Not the colours though!)

I walked my bike up through the woods and got onto the main road, where I then cycled towards Shipley. Halfway down the road I was passed a couple of ‘proper’ looking cyclists who both said Hello to me. (I replied with **PANT**COUGH**HI!**PANT**WHEEZE**) They both passed me easily enough but as the road started to go slightly downhill I decided to try keep pace. I managed it quite well too!

Getting to where I was about to turn off, we approached some temporary traffic lights and they both went towards the front of the traffic (as the lights were on red.) I followed. Reaching the lights, THEY BOTH JUST CARRIED ON THROUGH THE RED LIGHT! I was so shocked THAT I ALSO WENT THROUGH THE RED LIGHT! Luckily no one saw. I turned left at the next (green) set of traffic lights and tried to go up Carr Hill. It’s a beast. Seriously, cars struggle to get up it. I managed a few metres before I got off and pushed my bike, which was hard enough by itself! I (slowly) got to the top, got back on my bike, and peddled the steady mile or so home. All in all, I managed just over 10 1/2 miles in just over an hour.

Tuesday, myself and Sarah were both off work and it was quite a sunny day (not warm though) so we decided to go up to a place called Yeadon Tarn where theres a boating lake and… ducks and stuff. A lap of the Tarn is just under a mile. We walked halfway round, then got an ice cream. (Sunny = Ice Cream. Even if the weather is freezing. It was cold enough to have to buy a Hot Chocolate at the same time, but Sunny = Ice Cream.) We walked one lap, and then decided to walk it again, but without another Ice Cream.

Half way round our second lap, Sarah said that she could see a box floating in the lake near the edge, so we had a nosey when we went passed. Turns out that it was one of those boxes THAT CONTAINS SOMEONES ASHES AFTER THEY’VE BEEN CREMATED! The date on it was 2011. Now, I don’t know if they’ve been floating there for two years or not, but surely one of the boating people would’ve gotten them out by now? Otherwise, someones been to the Tarn recently with the box of ashes and accidentally dropped them in the water THEN JUST LEFT THEM THERE. I have no idea.

How I Think It Happened

“I’ve always wanted to be buried at sea.”

“Really? Bit far, the sea side. How about that Tarn Lake thing?”

“That Tarn… Yeah, I suppose that’ll do. I’d have to be cremated I guess, to go in there.”

“I’m not touching your ashes.”

“I’m not touching your ashes. I’ll get em everywhere!”

“Just open the box and tip me in.”

“Could do I suppose. What if it’s windy?”

“Do it in the bloody summer!”

The bloke dies in 2011. Eventually, the day comes. 2013. It’s been windy for two years, but she’s glad she’s waited for this day. The first sunny day of the year, though it’s cold. Sunny days mean Ice Cream however, so that’s the plan for afterwards. Probably a flake too. Reaching the waters edge she sheds a tear as she prepares to open the box. A slight breeze tickles the back of her neck.

“Sod this!” She says, and lobs the whole box in.

Speaking of made up stuff, I wrote a short story and put it on that WattPad website. If you fancy a read, it’s here (opens new window):

(A shorter short story, would be a better name.)

Any comments are welcome!