In Which I Get Hungry, Thirsty, and Very Very Cold

I’d been looking forward to this run for quite a few weeks, my first night time run with pyrotechnics and fireworks, followed by a hog roast and cold beer. Who wouldn’t be looking forward to it?! (Apart from someone who doesn’t like fireworks. Or a teetotaler. Or a vegetarian  I suppose…)

Point is, I was excited.

We embarked (don’t really get the chance to use ’embarked’ much in a sentence, so I take every chance I can,) and looked for seats. The carriage we had got on had a reserved ticket stuck on the back of each seat so all the passengers that embarked before us passed them by. I did the clever thing and looked at which tickets the seats were reserved from and to. The two right next to where we embarked were reserved from York to Newcastle, and as we were getting off in York, we sat down. (If you embarked in York and went to Newcastle on Bonfire Night, and thought you’re seats were warm, you’re welcome.)

Got to York station and Nigel went to the toilet. I had a bit of Powerade while I waited. We then walked the mile or so to York racecourse, where the run was taking place. Toilet stop again. We showed our tickets and then went and found the registration tent where we  found out we had to fill out a form first. We found the forms, then went back to the registration tent where we were told we had to go look at a board to find out our numbers before registering. We went and found our race numbers then went back to the registration tent and registered, where we were given a very nice technical T-Shirt and our numbers. Also, we got a sparkler each. 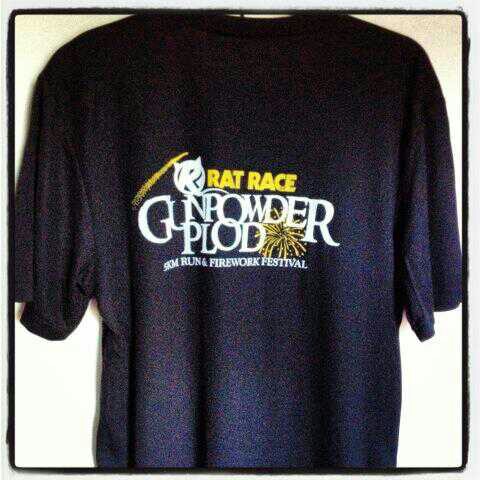 Nigel then went to the toilet again.

Working our way past all the food stalls selling chilli and hog roasts and things, we found a quiet bit of the field and got changed into our running gear. (Both had a base layer on so it wasn’t like we were flashing anyone. Anyway, if they don’t want people getting changed in the open they should supply a changing tent.)

We walked back to the toilets (past the changing tent) and both used them this time.

After that we made our way to the stage where the runners were supposed to gather. There were about 300 people there (out of 1500) and the run was 10 minutes away from starting. They made an announcement saying that people got in late to the registration and so it was going to be delayed a bit.

Eventually, finally, the race began with a couple of fireworks being set off.

The race was run on a pathway around the circumference of the race course, and the path was about six foot wide with muddy grass on either side. 1500 people were jockeying for a better position. (Jockeying! whilst running round a horse race course! hahahaha!)

It was really slow to start with due to it being dark and so many people. A few of the more forward thinking runners brought torches and head lamps, but not us. We were told before the race started that the route would be one
and a half times around the track. A few of the sections of the track were marked out with little flames on each side and every so often there was a small burst of flame. Not quite the spectacular pyrotechnics we were promised. I’d’ve done better lighting my sparkler!

I lost sight of Nigel before too long due to the closeness of the other runners, and the dark, so didn’t talk much going round. Before too long my legs began to hurt due to being stood around in freezing conditions before we started, and after about 3k I walked for about ten seconds. When I set off again, Nigel turned up behind me and told me that he’d had to nip off the side of the track to go to the toilet again.

We ran the rest of the race together and finished at a faster pace. My official time was 33:15. Not my quickest ever 5k, but still happy with the time.

After we’d finished we made our way to the finishers tent (another queue) where we then collected our finishers medal, plus a bottle of water and a Snickers. We then went to the toilet. 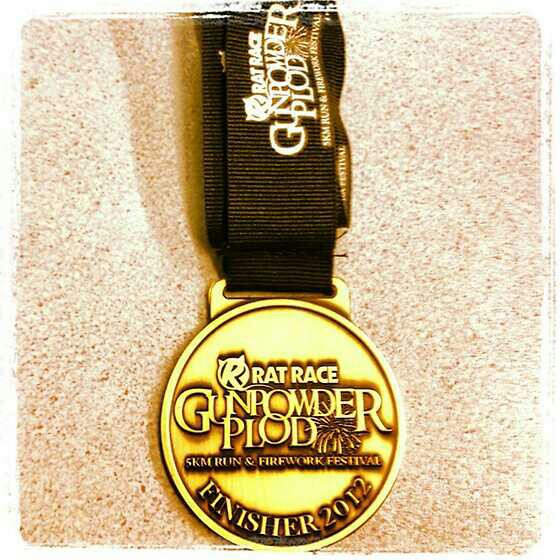 I was looking forward to the beer tent and food stalls but there was a slight problem. Thousands and thousands of spectators were there before us. Queues had hundreds of people, all wanting beer and hogroast. We both agreed we’d had enough of delays and queues so we decided to go to the bar in the train station. We walked back, but it was closed, so we bought a few beers from the shop, embarked our train, and drank them on the journey home. 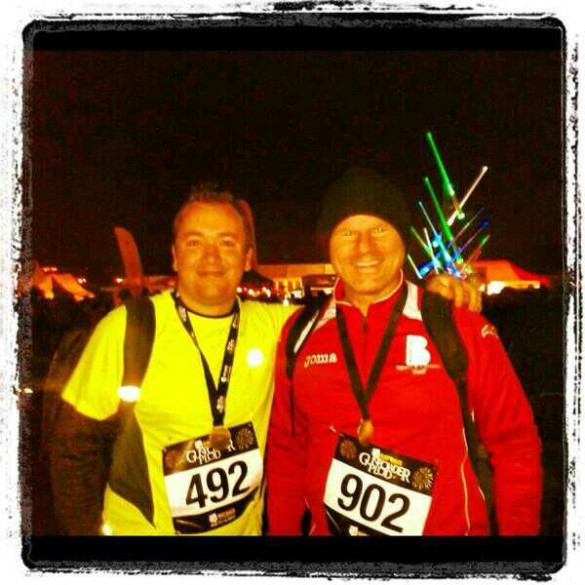 The day after the run I got an email from the race organisers saying that due to all the delays they would be donating £5000 to a local charity, and offering a 50% discount on any one event for next year. Which is nice of them!

Hope I get to embark another train.

In Which I Get Letters After My Name

Last week I was entered into the Stadium Striders 10k Trail Run in Brighouse, and here’s my recap:

That’s right, for the first time EVER since I started running (June this year) I missed a race that I’d entered. I hope that the start didn’t get delayed while they waited for me to turn up. My phone was off so I don’t know how many hundreds of times they tried to call, and I must’ve missed them knocking on my door. I bet the whole day was a let down because I didn’t show.

I had good reason though, for the few days leading up to the run my legs were aching, and didn’t want to try run my first ever trail run with sore legs. I thought that I’d regret not going and that I’d be full of remorse, but I guess the little voice in my head knew it was for the best because it didn’t say anything. Instead, me and Sarah had a lie-in and watched Sunday Brunch (Madness were supposed to be on, but they weren’t. I think they must have been too upset about me not showing up for my run.)

On the plus side though, having missed a race seems to have motivated me on a bit more than I was previously motivated. I went out of the bike on Tuesday and rode the 5k route that I ran last week in 20:20, and then the day after I rode the same route again in 17:39. I keep reading about running and cycling and the thing I read the most is “It’s time in the saddle, not speed or distance that makes you better.” I think tomorrow I might just sit stationary on the bike for an hour or so and see how much better I get.

Also, back to motivation, I’m going to start running in the mornings instead of evenings. That way, I figure, I can run from home towards work (bit of a detour to make it into a 5k run) and finish at my gym which is pretty much next door to work. I can then shower and change before starting my day. If I feel up to it, I could maybe do a bit of weights too. Maybe.

My next scheduled run is the Gunpowder Plod on 5th November in York, and there’s no way I’m missing that’n!