In Which I Go Back AGAIN

Mad Dog. One of my first 10k races ever and the one that I always say means that my running year has started properly. (York marathon in October signalling that I can take it easy over the winter. As though I’ve been pounding the pavements all summer..!)

The main concern with this years Mad Dog (Sixth year in a row I’ve been there!) was getting there. (Floo powder?) For the five years previous I’ve been living in Yorkshire and so a little over an hour drive and you’re there. At the end of last Summer we moved up to just outside Edinburgh and so the commute to the race got a bit longer. Four hours to be exact. (Not too exact. Four and a bit hours. Four hours 15 minutes. And 17 seconds. Not counting stopping off.)

(Four hours 37 minutes and 32 seconds in total to be exact.)

There was also the matter of staying over to take into account as it was too much driving (For Hayley) to go there and back in the same day (lazy) so we decided to make a weekend of it. (In Southport. In Winter.)

I had a hotel booked (Ramada Plaza) with payment on arrival, which was £90 for room only so we decided to stay Friday and Saturday nights. A few days before race day however, I got an email from the (excellent) organisers of the Mad Dog 10k saying that you could get Bed and Breakfast for £90 a night and organise late check out if you mentioned Mad Dog but only at the hotel… Ramada Plaza!

Straight on to the phone was I, and the nice lady at the other end changed my booking. Same price as before but now with late checkout and breakfast for us both? Magic!

I won’t bore you with the Friday and Saturday details because you’re here for the race recap and not a holiday recap. But we ate plenty, had a good wand-around, Hayley spilled my beer all down me on the Friday, and we played in loads of Amusements and won a baby Groot after spending a few quid(ditch).

Getting up nice and early (nope, snoozed my alarm loads) we went down for breakfast. I took it easy and had bacon (x2) sausage (x2) hash brown (x2) and coffee (x2 and a bit.) We then walked the 15 minutes to the car park where the coaches were lined up shuttling runners and spectators to the start of the race. Only takes five minutes or so on the transfer buses and its free for everyone.

Every year there’s a movie/tv theme to the Mad Dog 10k with a canine connection. This year was Hairy Potter and The Half Bred Pup and as such there were plenty of Harry Potter costumes going on. We saw a few wizards, plenty of HP scarves, a woman dressed as a broomstick and, oddly, five blokes dressed as the Spice Girls. (It’s not Leviosah, it’s Levi-Zigga-ZiggAH.)

A nice touch and to save time at the end, you can get your t-shirt and goody bag before the run. (Medals at the end still.) It means that if people want to run in that years themed tshirt they can, and also reduces congestion at the end of the race. The goody bag is BRILLIANT. You can wait til the end though.

Time to line up so went and lined up. Must’ve got giddy with my predicted time because I was right at the front. The race was started by Jo Pavey (an ACTUAL Olympian) and after a countdown and some barking, we were off. The course is an out-loop-back kinda set up. The first and last 2.5k are on the same stretch of road with a 5k loop in the middle.

There’s plenty of bands/singers/entertainment going on and the middle loop is always well supported. You run alongside the coast for a lot of the run and even though the day had started off icy, it was very nice running weather. 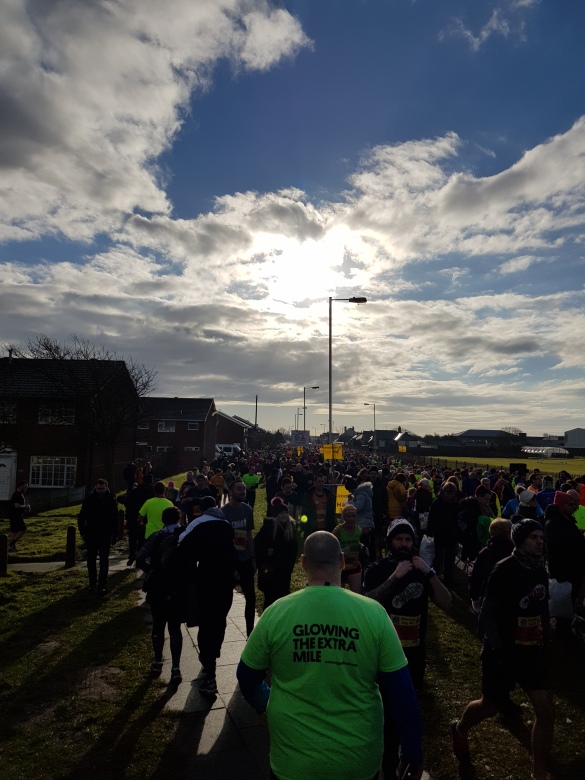 Now the thing is, starting too far forward means that there’s fast people around you. From the start. And because they are fast you feel you have to go fast too as otherwise they all overtake you. Which is why, after planning to start off around 8m15s a mile, I clocked my first mile at 7m15s. WAY too quick. I actually did the first two miles in 15 minutes which is probably where the (golden) stitch came from to slow me down.

Running towards the Pier and by the Elvis impersonator (think he lives under that Pier, he’s always there) I made myself slow down because I knew I couldn’t keep that pace for long without messing up the second half of the race. Still, first 5km done in bang on 24 minutes.

Water station coming up so allowed myself to walk through it to get some energy back before tackling the second half (blood prince) of the course. I was nowhere near the speed that I had before and that was fine by me. Sub 50 was ebbing away but figured I can still get under 51 minutes. Before I knew it I was back on the main road and then turning towards the finish line, keep going keep going annnnnnnddd…… finished. 50:41.

So that’s that! Mad Dog 10k done for six years in a row now. Will I make it back for next years race? Always. (Especially seeing as though it’s called “Bark To The Future”!)

Oh wait! Before you go!

LOOK AT THE GOODY BAG! 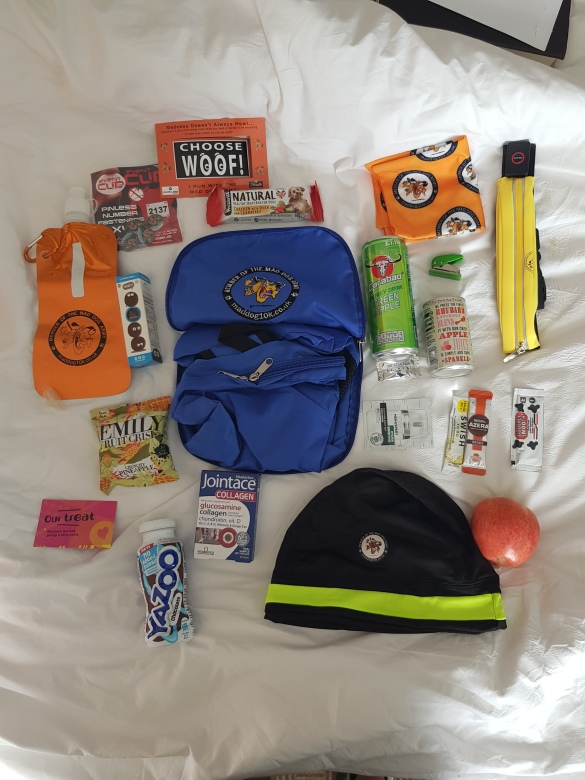 Backpack, Running hat, Racebelt (THAT HAS A FLASHING LIGHT) Water Bottle, Fridge Magnet Picture Frame, Snood, Fruit, Energy Drinks, Number Clips, loads of snacks PLUS the Medal and TShirt! (The bar just above the bag is a doggy treat bar. I’ve seen a few people on facebook that didn’t realise it wasn’t an energy bar til too late… Mongrels!)

*flies off on his broomstick for butterbeer*